Starburst (once known as opal fruits) are cube-shaped, fruity flavored soft taffy candies that are made by the Wrigley Company.

They are both vegan and non-vegan, this factor depends entirely on where you live and where you source your starburst from.

In the United States of America, starburst is not vegan as it contains an ingredient that is extremely not vegan, gelatin.

However, in the United Kingdom, starburst is vegan, with both the packaging and the website stating this fact. 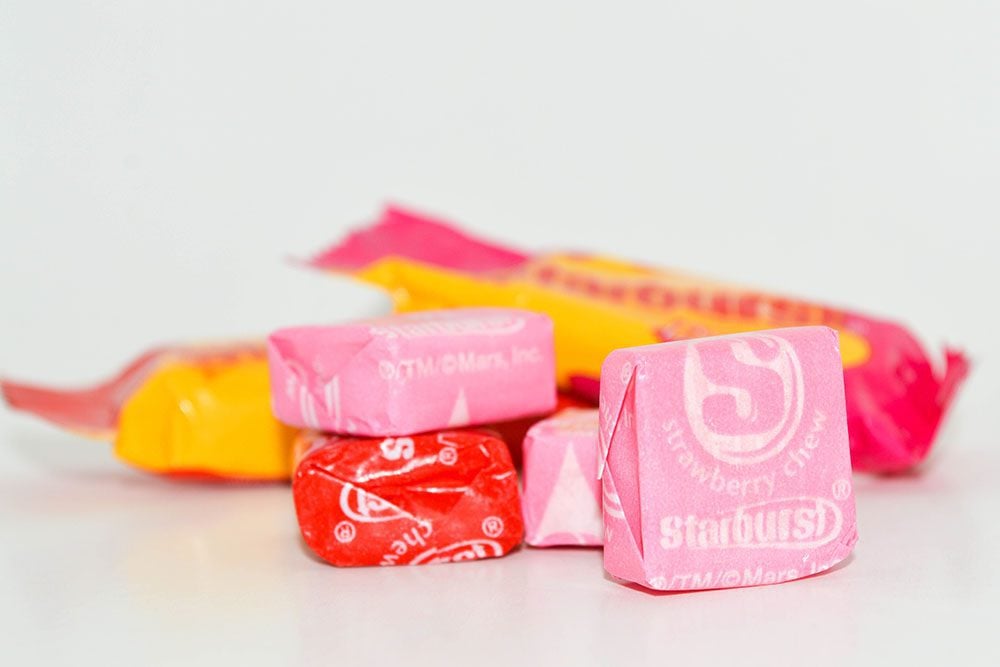 Opal fruits/ the original starbursts first came into existence in the United Kindom in 1960 and made their way overseas to the United States in 1967, not long after.

So why is it that they are vegan in one place but not in another? How can you be sure? And what exactly goes into a starburst?

And, don’t forget the big question, how come the different ingredients vary in different countries, is there a reason for it or is it simply down to manufacturer choice?

We will answer all of these questions for you as we take a look into the ingredients vegan and non-vegan, the disputed ingredients, and exactly what a starburst candy is.

In the United States of America, you can find a variety of starburst treats, including both starburst candies and starburst jellybeans.

Which are both very from very similar ingredients. Starburst has a general ingredient list that makes up the majority of their products.

These general ingredients are;

Depending on the flavor and where your starburst is made the ingredients will vary.

However, if starburst were to solely entail only the ingredients listed above it would, by default, be vegan.

But, sadly, in the United States, this is far from the case. As they include an ingredient named gelatin in their candies.

Jelly beans do not contain gelatine, but they do, however, contain something else which is called ‘confectioners glaze’.

In the United States, you can check the ingredients on the packaging, these will be shown as;

The inclusion of gelatin is a big deal for vegans as it is made from contents disapproved of by vegans, lets take a look at why this is.

Gelatin is a colorless, odorless, flavorless food use ingredient that is used to bond the ingredients of candies together.

The role of this is to simply hold the ingredients in place and give it a soft, gummy chewy texture that we all love in these candies.

The ingredients that make this substance are rather disgusting, to say the least, and it is not surprising that vegans and possibly many other people would stay away from it.

Gelatin requires several animal body parts to make this substance, usually from a pig or cow carcass. This is done by boiling the skin, bones, ligaments, and tendons in water.

These parts are treated until a collagen is produced and is then refined and then hardened into a solid-state that we recognize as part of our foods, often used in soft candies such as starburst and also in things such as Jell-O.

Although there are plenty of vegan-friendly plant-based substitutes that are a healthier and much more animal friendly alternative to gelatin.

This include ‘agar-agar’, which is sometimes marketed as gelatin but is in fact plant based.

The United States starburst manufacturers prefer to use the animal and meat based by-product of gelatin. And no one seems to know exactly why.

What is candy without its outrageous amounts of sugar content? Sugar is not the healthiest of substances but our bodies do require it- or at least they require natural sugars.

Sugar, however, is up for debate amongst vegans.

It is heavily disputed and although sugar is not inherently un-vegan, the refining process of sugar cane is the topic that has vegans wondering if it is really okay to have.

Cane sugar is refined and processed with bone char. Though it, in itself does not actually contain any bone char, it is this processing method that makes it a disputable topic that many vegans still are not quite sure about.

Food colorings are debated, these are not from animal origins but these colorings can often be tested on animals.

However, this topic as a whole, animal testing, is up for debate, some vegans will only wear products that are not animal tested whereas others may not be so specific in their choices.

This is similar to animal testing for food colorings. It is worth noting that many food coloring manufacturers do not test on animals anymore, so it is less of a concern now than it has been in the past.

Now we reach the topic most highly debated amongst vegans, as well as vegetarians and anyone who is pro-environmental conservation.

Palm oils are not made from animal parts and nor are they tested on animals.

However, they are indeed made in a way that has a detrimental effect on the environment, one that causes homelessness and death in many animals.

There is much action to prevent the production of palm oils from being so damaging to the environment and many companies have shifted from palm oils to other alternatives.

This substance is not so much of a debate just among vegans but it is a debate amongst many who seek environmental conservation and sustainability.

What about Starburst Jelly Beans?

It is probably pretty safe to say that Jelly Beans are one of the most loved and most popular candies worldwide.

And, starburst is one of the largest producers of these as well. But sadly, These are not vegan either.

Although Starburst Jelly Beans are not vegan, this is not down to gelatin, there is another culprit at play in these candies.

We mentioned this perpetrator earlier- confectioners glaze. This glaze is maybe even more disgusting than the ingredients that make up gelatin.

Confectioners glaze contains a substance in it, which makes it unfriendly to vegans and probably many others if they knew what it really was.

Shellac is the ingredient that makes Jelly Beans inedible for vegans.

This is a substance that is also known as ‘beetle juice’, this is used by manufacturers to produce a shiny finish, that once that makes Jelly Beans looks so mesmerizing and juicy. So, what is so utterly disgusting about this?

Well, it is rather unappealing as it is nicknamed ‘beetle juice’ in quite a literal sense. While it is not the juice from squeezing a beetle, it is made from the secretions of bugs.

It is a resin secreted by the female lac bug onto trees in the forests of India and Thailand. It is processed and sold as dry flakes, it is then dissolved in alcohol which will turn it into a liquid substance.

What is maybe even weirder is that this substance is also used as a brush on color for wood glazes and finishes, and we eat it!

How Can I Get Vegan Starburst?

If you really want to get some vegan starburst, then you will probably have to go online and scour the internet to buy internationally from the United Kingdom.

This can easily be done through Amazon or private online sellers and some online stores may even do gift boxes of British candies and vegan options.

If you do decide to buy online then be cautious of packaging. Packaging in your local store will be labeled and clearly tell you if it is vegan or not.

However, it can be more difficult to tell when you are shopping online from stores such as Amazon.

Luckily gelatin is the only animal by-product, non-vegan friendly component. It is totally dairy-free with no milk or eggs.

There no warnings on the packaging either, so it very likely that they use one machine to only make and manufacture these candies, unlike some companies which will use one machine for multiple purposes and risk cross-contamination of foods.

So you can rest assured that starbursts have been nowhere near any dairy products and neither do they contain any either.

Should You Buy Starbursts?

The Wrigley Company of which produce starbursts is a subsidiary of the Mars Company.

It is not unknown that both of these companies produce and make a profit off of the production and selling of dairy products.

This means they are in turn actively contributing to the pollution caused by cow dairy farms, the destruction caused by this type of farming, and the animal cruelty it causes in its wake.

And so, it is not unusual for some vegans to completely boycott these types of companies, or to cease their consumption of the “accidentally” vegan products that these companies sell.

As the fear is that the profit made from these sales will simply go back round into the production of non-vegan products.

And why would you want that?

Well, there are a few vegan activists and such that make a fair point as to why you should still invest in the vegan products made by these companies.

It is similar in some ways to getting your gas from a gas station that sells hot dogs or tacos, the money from your gas will help them continue to produce non-vegan snack and junk foods.

And it is also much like grocery shopping, while few grocery stores are vegan only, most people will have to shop at a store that does vegan and non-vegan produce, and so you still shop there.

The logic of this argument is that if you buy vegan products from non-vegan only companies then you will let them know that it is selling.

The more vegans that buy from these places, the more their vegan-product sales will rise.

In turn, this will make the company realize that vegan products are just as financially lucrative as their non-vegan options and they may produce more vegan products as a result.

It is a personal choice as to whether or not you want to invest your money in buying from a company like Wrigley that also produces non-vegan foods, but it may help to do so because as a result more vegan options may become available and may even replace non-vegan options.

While being vegan is beneficial to health, the environment, and more, it can be a bit of a bore trying to find candies, foods, and junk snacks that you can eat.

Not to mention when you get those cravings for a snack that you had before your vegan days and realize you cannot have it.

Luckily enough if you get a craving for starburst, you can get them vegan, although if you live outside of the UK it is a bit more difficult and will result in a bit of internet shopping and intense label reading, it will be worth it.

We hope that starburst and Wrigley will eventually shift their vegan starburst over to the United States and other countries.

It is a shame that so many wonderful candies are not yet vegan but we are sure that if enough people keep buying them they will soon be everywhere and you will be able to get all your favorite childhood candies from your local store with ease.

Do not forget to stay informed about ingredients that may not be vegan friendly in products; think of gelatin and shellac and remember to recognize them when you are label checking, especially on candies.